The origins, etymology, and even the ingredients used to make the original eggnog drink are debated. Eggnog, or a very similar drink, may have originated in East Anglia, England, though it may also have been developed from posset (a medieval European beverage made with hot milk). The “nog” part of its name may stem from the word “noggin”, a Middle English term used to describe a small, wooden, carved mug used to serve alcohol.

Another name for this British drink was Egg Flip. Yet another story is that the term derived from the name “egg-and-grog”, a common Colonial term used to describe rum. Eventually the term was shortened to “egg’n’grog”, then “eggnog”.

The ingredients for the drink were expensive, so it was popular mainly among the aristocracy. “You have to remember, the average Londoner rarely saw a glass of milk,” says author and historian James Humes (To Humes It May Concern, July 1997). “There was no refrigeration, and the farms belonged to the big estates. Those who could get milk and eggs to make eggnog mixed it with brandy or Madeira or even sherry.”

The drink crossed the Atlantic to the English colonies during the 18th century. Since brandy and wine were heavily taxed, rum from the Triangular Trade with the Caribbean was a cost-effective substitute. The inexpensive liquor, coupled with plentiful farm and dairy products, helped the drink become very popular in America. When the supply of rum to the newly-founded United States was reduced as a consequence of the American Revolutionary War, Americans turned to domestic whiskey — and eventually bourbon in particular — as a substitute. 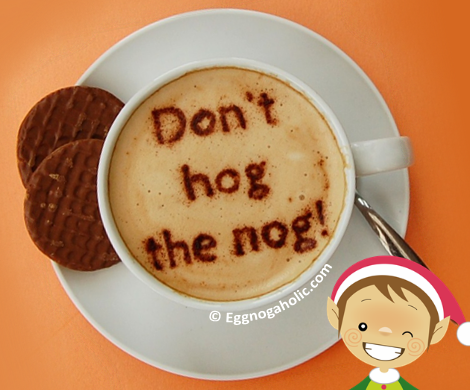 Traditional eggnog typically consists of milk, sugar, spices, and raw eggs. Frequently, cream is substituted for some portion of the milk to make a richer drink. Some eggnogs add gelatin. Toppings may include vanilla ice cream, meringue, whipped cream and wide variety of garnishes, notably grated nutmeg and chocolate curls.

Eggnog can be produced from homemade recipes, or ready-made eggnog containing alcohol and “just-add-alcohol” versions are available. Whiskey, rum, brandy, bourbon or cognac are often added. Since the 1960s, eggnog has often been served cold and without spirits, both of which are significant departures from its historical origins.

It has traditionally been high in fat and cholesterol but low-fat and sugar formulations are available using skimmed or lowfat milk. In North America, a few manufacturers offer seasonally-available, soy- or rice-based alternatives for vegans and those with dairy allergies.

The ingredients in commercial eggnog vary significantly, but generally raw eggs are not included as in traditional eggnog.

The U.S. Food and Drug Administration (FDA) has changed or altered the definition of eggnog a number of times towards more modern artificial replacements for the large number of eggs usually required, and safety concerns in selling products made from raw eggs and milk. According to modern FDA regulations, eggnog can be defined as containing at least 6.0 percent butterfat and at least 1.0 percent egg yolk solids.

In the home and in restaurants, traditional eggnog recipes calling for raw eggs can be made more safely by using pasteurized eggs.

The Eggnog Riot, sometimes known as the Grog Mutiny, was a riot that took place at the United States Military Academy in West Point, New […]